The venues for two of the first ceremonies were West Way Nissan Stockport, and Bristol Street Motors Halifax. In each case, the new owners were thrilled to get behind the wheel of a car boasting futuristic design and next-level comfort combined with huge range of technical innovations.

It was certainly a big day for the team at West Way Nissan Stockport, where customer Christy Ashe picked up his Nissan ARIYA 63kwh Advance with the optional 22kw fast charger and finished in Aurora Green.

New Car Sales Manager Ben Gellatly said: ‘‘There was a huge amount of excitement surrounding the handover and the customer is actually one of our master technicians.

‘‘A current Nissan LEAF driver, he took one look at ARIYA on our launch day in May and decided to have one. Who better to be an advocate for the car? He is over the moon and will happily tell anyone how great it is.

‘‘Of course, we were delighted to supply Christy with his new car and we wish him many years of happy motoring. ARIYA is a truly stunning vehicle and we’re thrilled to start fulfilling customer orders.’’ 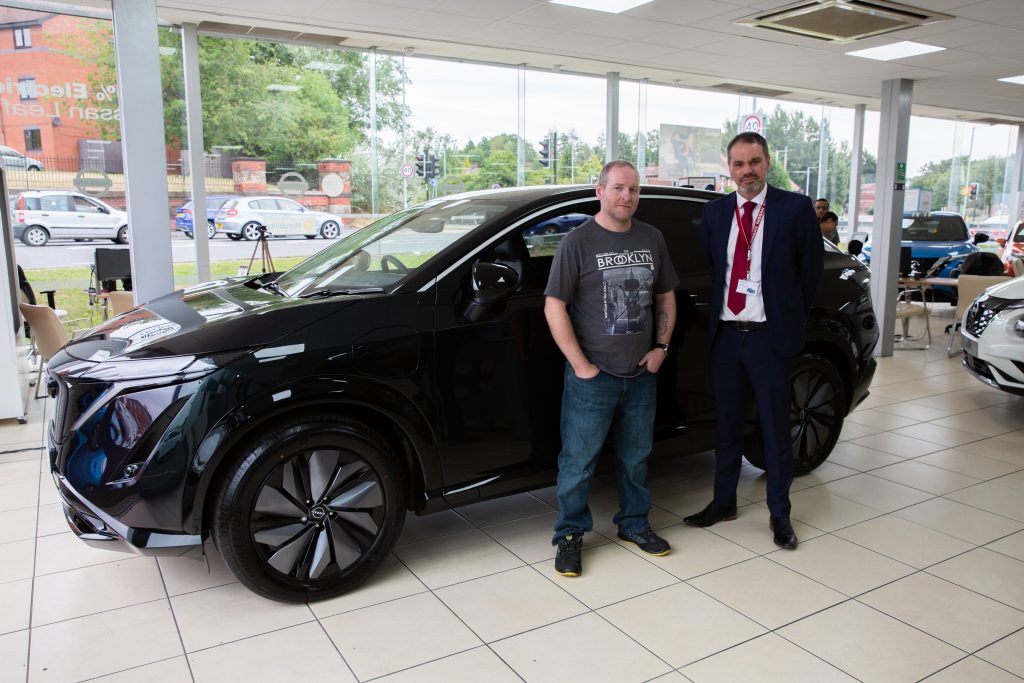 Christy confirmed he was pleased and excited to be one of the first UK customers to be behind the wheel of an ARIYA, adding: ‘‘The looks and styling attracted me when I first saw the car – and the technology represents a big step forward for Nissan.’’

At Bristol Street Motors Halifax, the first customers to collect their brand new ARIYA were Anna and Gerry Murphy, who had ordered a similarly specified car.

Kristian Spear, New and Used Car Sales Manager at the dealership, explained: “Anna and Gerry are loyal customers of ours.

‘‘We very much appreciate their business and are so glad and honoured that we could supply not only one of the first ARIYAs in the country, but also help them take their first step into the EV world. We wish them many happy miles of motoring.”

Anna explained: ‘‘Originally, we thought about going for a hybrid but we eventually decided to go fully electric. We were very impressed with ARIYA – in the showroom, it looked slick and different – really high-tech and futuristic. When we checked out the reviews online, we were convinced it was the car for us.

‘‘I have to say, the team at the dealership were great. They were super-excited about the car themselves and their enthusiasm was really inspiring.’’

The Nissan ARIYA has taken the automotive world by storm. Starting at £43,845 and with up to 329 miles of range, it won the Auto Express ‘Car of the Year’ award recently.

ARIYA delivers the very best that Nissan can offer in three key ways: its unrivalled EV heritage personified by the incredible success of the pioneering LEAF; its impeccable crossover credentials demonstrated by the continuing success of Juke and Qashqai; and levels of performance akin to the iconic GT-R.