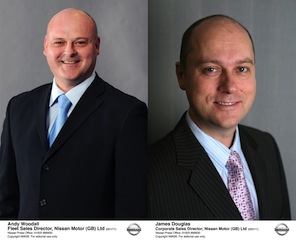 NISSAN has kicked off 2011 by having a reshuffle – they have announced changes within their corporate sales department.

Douglas joined Nissan in 1998 as area fleet manager and held several sales and marketing roles within the company before becoming fleet sales director in 2007. Douglas has been replaced by Andy Woodhall, who was previously a regional sales director for Nissan.

Douglas said: ‘I’m delighted to be taking over the corporate division during such an exciting time. Nissan is one of the fastest growing brands in the UK with considerable market share growth. Innovative new product such as the all-electric Leaf and Juke crossover make the marque more relevant than ever for corporate buyers.’

All positions start with immediate effect.