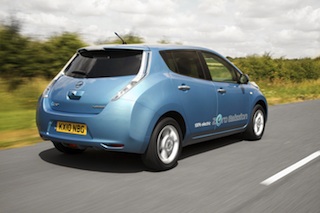 BUYERS could be battering down the doors to buy a Nissan LEAF as interest in buying environmentally-friendly cars has risen five-fold says Glass’s.

Glass’s has revealed that the number of people considering buying a plug-in hybrid or battery electric car as their next vehicle purchase has risen from 9 per cent to 53 per cent, representing a five-fold increase since the same question was last asked in July 2010.

The December poll aimed to discover motorists’ views of the Government’s £43m Electric Vehicle Plug-in Car Grant. It first asked respondents whether or not they would consider buying an electric or hybrid vehicle prior to notifying them about the Government incentive, to which 36 per cent said they would.

Andy Carroll, managing director at Glass’s, said: ‘This is a phenomenal increase in a very short space of time and represents a fast-growing acceptance of the emergence of plug-in hybrid and electric vehicles into the mass market.

‘It is also clear that the Government’s Plug-in Car Grant is making an impact on figures and could be the deciding factor for people already considering buying a plug-in hybrid or battery electric car, as well as appealing to those who would not previously have considered it.’