THERE’S high praise for the Nissan GT-R in the latest edition of Autocar magazine.

Writer Steve Sutcliffe compares the car to a BMW M5 and runs a series of tests in which the GT-R emerges triumphant.

He tells how a reader emailed him to ask whether there was any reason not to buy an M5 – and after giving the matter some thought, ‘an answer appeared out of left field: the 2012 Nissan GT-R.’

Sutcliffe writes: ‘In the acceleration tests, the M5 got so badly thumped that I swear you could see tears weeping from its headlights at one point.’

And he adds: ‘Under brakes, from 100mph to zero, the M5 felt reasonably incredible in isolation, coming to a standstill from three figures in a mere 4.5sec. But then the GT-R just blew it to pieces, stopping tens of metres sooner from 100mph and taking half a second less in which to do so.’

Sutcliffe goes on to sing the GT-R’s praises for a wide variety of other reasons, before concluding: ‘The GT-R was a whole lot more fun to drive. And it wasn’t just me who thought this but anyone and everyone who drove the two cars during the day.’

The Nissan GT-R is an icon of Nissan’s pioneer spirit; the company invented the concept of the ‘multi-performance super car’ and made high-performance vehicles accessible.

It continues to evolve; the 2012 version has improved features in terms of performance, efficiency and refinement to provide further excitement to drivers and passengers. 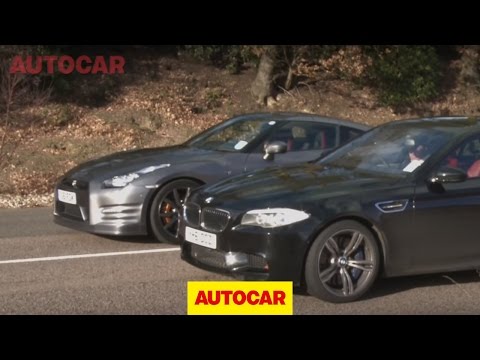