THE NV200 has been selected as the exclusive taxi of New York City for ten years beginning in late 2013, it has been announced.

The New York City Taxi and Limousine Commission (TLC) selected the Nissan NV200 as the ‘taxi of tomorrow’ in a exclusive competition to decide the city’s next taxi.

‘Nissan is proud to provide the next generation of taxis for the City of New York,’ said Nissan Americas Chairman Carlos Tavares. ‘The NV200 taxi will give Nissan the opportunity to showcase our dedication to vehicle quality and urban mobility to more than 600,000 passengers every day.’

The Nissan NV200 taxi a modified version of the van which Nissan dealers in the UK already. The modifications include ‘a low annoyance horn’ to reduce noise pollution, a transparent roof panel, USB sockets in the rear, and sat-nav for the driver.

‘The city’s Taxi of Tomorrow is the Nissan NV 200 – and it’s going to be the safest, most comfortable and most convenient cab the city has ever had,’ said Mayor Bloomberg. ‘We started this process to leverage our taxi industry’s purchasing power to get the highest quality taxi, one that that can expand and redefine the legendary image of New York City taxicabs.

‘The new taxis will be custom-designed to meet the specific demands of carrying 600,000 passengers a day in New York City traffic and the vehicle meets the top priorities identified by the public in our on-line survey.’

As part of the program, Nissan will also provide six LEAFs and charging stations to taxi owners for testing as part of a programme to study the use of zero-emission, electric vehicles as taxis. 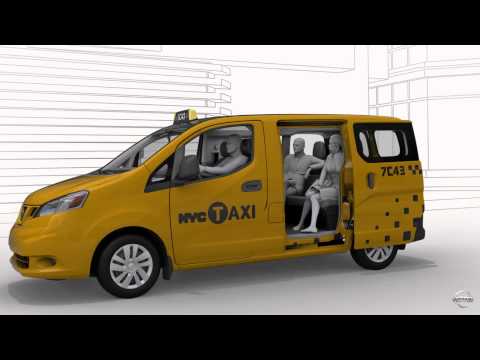 Nissan look forward to third round of GT1