TODAY we’re happy to share a video that shows a Nissan Juke R beating a Bugatti Veyron supercar off the line.

The two lined up in an organised drag race in Russia – the Bugatti packing just shy of 1000bhp from its eight-litre, quad-turbo W16 cylinder engine and the equally rare Nissan Juke R boasting nearly 700bhp from a tuned version of the Nissan GT-R’s 3.8-litre twin-turbo V6.

As the lights go out, the two rapid motors are given full throttle and the beefy SUV somehow manages to put its power down with greater ease than the Veyron.

It races ahead, and by the time the ¼-mile marker is visible, the Juke R is a few car lengths ahead.

The Veyron then summons all of the power from that enormous engine and, thanks to its slippery shape, manages to cross the line just ahead of Nissan’s fiery SUV. 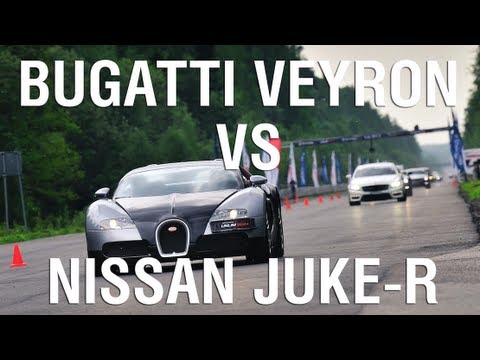 Jann is back at Le Mans... but this time he's there to race